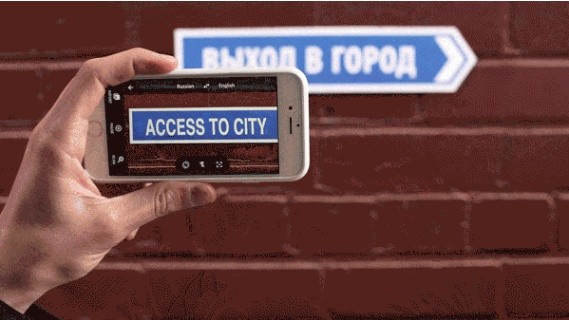 Google has updated the Google Translator App which already translates speech but can now also translate text via camera. So you aim your phone’s camera at a text – e.g. a road sign or a menu – and the app translates the text. Probably the most impressive part is that it works even without internet connection.

The feature works on both Android and iOS systems. It translates Spanish, German, Italian, French, Russian and Portuguese to and from English. This is very good news for travelers that don’t want to spend money on a foreign phone card or use their smart phone’s internet service from their own home country which can get very expensive.This is not a new concept because a very similar one has already been working for a while, but now the app is integrated to the Google Translator.

The update on the Google Translator will also bring something new into spoken translations: now you don’t have to select the language manually on each phrase – the app will automatically detect which language is being spoken. It doesn’t detect just any language and translate it to your language automatically, though.

You still need to feed the languages to the app – if you’re trying to learn for example Spanish you set Spanish and English as the conversation languages and the app will be able to separate the languages from each other.
Read more about it in Google’s Inside Search Blog

If you’re looking for a more rewarding option for a dictionary and want to learn a language but can’t afford or don’t have the time to participate on language courses, the app Duolingo could be the answer. It offers virtual language courses and helps you to learn a language easily and fast. It has already over 70 million users world-wide. The languages taught are English, French, Spanish, German, Dutch, Irish, Swedish, Russian, Italian, Danish, Portuguese and Turkish.

The courses are free of charge and take the student further in the learning process step by step. This happens through offering new challenges after the ones already accomplished. It is described as a fun and interesting way of learning a new language. Some claim to have learned to speak a language fluently in three months with the app.