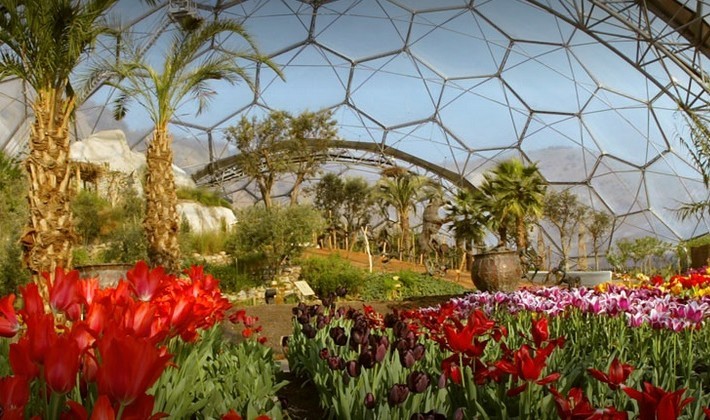 Eden, the world’s largest indoor rainforest, located in the UK has been visited and awed already by millions of people.

The outdoor garden transformed from a bleak clay pit into a vibrant garden has even been called the “eighth wonder of the world” by Times Magazine. Eden is run by people that are passionate about the cause, both paid and volunteering workers. Is this what the future might look like for us: people taking care of the nature and most importantly, each other? I sure hope so. Originally Eden was an idea Tim Smit got in 1995 (and made a drawing on some napkins in a pub) when trying to figure out what to do after restoring the Lost Gardens of Heligan. He just needed a big enough space for his plans, and he found one in Cornwall. Before Eden the place was just a massive china clay pit that was at the end of it’s economic life.

Co-operating with Reading University 83,000 tons of soil was created from mine waste and composted bark – helping to prove that it’s possible to regenerate the environment this way. Finally in 2001 Eden was opened to the public. They try doing things in the most sustainable way possible but in their own words ‘are careful to avoid too much ‘eco-bling” in their system. By this they mean impressive-looking but not necessarily working or suitable technologies. They recycle everything and guide the visitors in doing so too. They experiment the potential of different technologies to create energy: hydro, wind, solar and thermal power.

Eden is not merely a beautiful garden but they do a great deal of charity including work with socially excluded people, prisoners, children, disadvantaged people, as well. They also arrange all kinds of events from weddings to concerts and offer a variety of courses like gardening, horticulture, teacher training, recycling, courses for kids, to mention a few.